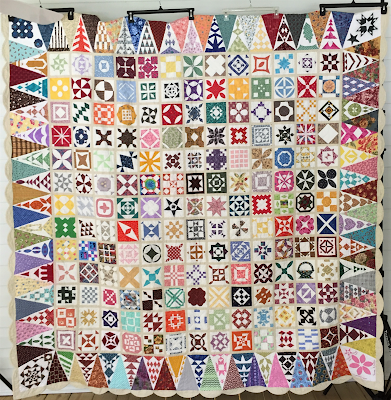 My Dear Jane quilt is finished!
This quilt has taken my almost two decades to complete, but from 2006 until 2019 is rested in my hope chest waiting patiently to be completed. 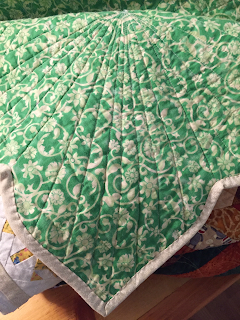 This is how I finished off the corners, which is a little different from the original Jane Stickle quilt.  I generally finish of scalloped borders with a right angle  - just my preference.  Jane Stickle's quilt continued the scallops to the corner and then put a little knob in the corner. 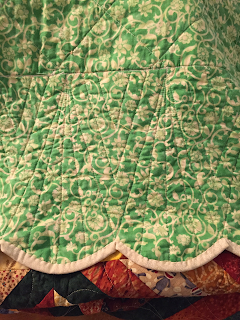 A view of how I quilted the scallops.  I purchased this green backing fabric in Paducah, Ky many years ago and happy it finally found a quilt to call home.﻿ 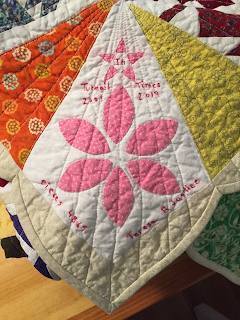 My signature block.  The original quilt stated "In War Times" as Jane Stickle made it during the Civil War while her husband was away serving in the Union forces.   I decided to call mine "In Turmoil Times" as I feel our country has been in constant turmoil over the last two decades.  I completed my first block on September 10,2001, just one day before that awful day of September 11, 2001.  Since that day, our turmoil has included the search for Bin Laden and then Sadam Husein, terrorism attacks, ISIS,  the school and other place mass shootings, Black Lives Matter movement, Me Too Movement, economic disasters, political fracas, international and at home disasters of hurricanes, tornados, earthquakes, fires --- the list just goes on and on.  I guess that has been the way it is has been for many years, but my heart and mind yearn for days of peace.
﻿
Posted by Teresa at 9:04 AM

Totally awesome! Your Jane is glorious!

What a tremendous accomplishment! Absolutely gorgeous! Love the signature block!
You have certainly created beauty and peacefulness with this heirloom quilt, and the many hours of peaceful contemplation in the making of it!

Wow, that is a labour of love! I can only dream of making one of those some day....

Your Dear Jane is wonderful! It is like a right of passage making one of those....something I have not taken the time to accomplish.